Introduced in 1961, the Tremar vibrato assembly was mounted on the last DeLuxe series, and was subsequently the standard tailpiece for all Hagström solidbodies throughout the 60’s (for the Viking hollowbody models a decent Bigsby copy was offered whenever a whammy was required). The H-II N produced in the early 70’s still featured a Tremar.

The construction is quite simple. It consists of a characteristic horseshoe-shaped base-plate hinged to another plate bearing the arm, both plates being tied with a spring underneath controlled by a tension-adjustment screw.

Compared with a Floyd-Rose or even vintage Stratocaster vibrato, the Tremar offers poor pitch variation. One tone below and a halftone above is the utmost it can achieve. Adjusting in floating position is often uneasy or impossible since the spring strength was calibrated for the heavy string gauges (012 etc.) that were in general use in the early 60’s. With lighter strings you should better install a lighter spring, unless you’re ready to cut off a bit of the original spring.

Another reason for this lack of flexibility is the fact that the tension-adjustment screw is long enough to allow the spring to extend over 35 mm (1.38″) while the body routing is only 30 mm (1.18″) in depth, since 35 mm is just the standard body thickness for all Tremar-equipped Hagström guitars. Did the company ever consider using thicker bodies, or installing the tremolo in an open pit like a Strat trem routing ? (There’s another similar small mystery : the base plate shows 6 orifices that are of no use, or could only have made sense if ever Hagström had considered through-body stringing à la Telecaster.)

In the early 70’s the use of tremolo devices went gradually out of fashion. The musical correctness of the day favoured the more challenging Claptonesque art of finger vibrato. Many players got rid of the arm, which is therefore missing on too many Hagström guitars on sale on the second-hand market. Making a replacement bar is quite simple, but finding an adequate screw to hold it in operating position is almost hopeless. Hagström used a special thread of its own that didn’t match any industry standard. Steel screws with a similar diameter you may find sometimes should be avoided, they are likely to hopelessly damage the original screw hole. The best solution is to try soft aluminium screws, some are able to perform satisfactorily.

Except for the Kents, plagued with their (in)famous wooden bridge, the Tremar’s necessary mate is the so-called MicroMatic bridge. It is a rocker bridge, i.e. it moves along with the strings, thus preventing string wear. There is not much travel available for proper intonation setting, and before you untertake any adjustement you have to loosen the strings and remove the device. On the other hand the six individual saddles offer the unique advantage that you can precisely arrange the string spread at bridge to your taste, for example in order to focus it on the bridge or neck pickup poles. A very appreciated feature since pickup alignment leaves sometimes a bit to be desired.

It is worth to notice that the MicroMatic preceeded the Tremar itself, and survived it. It was already fitted on DeLuxe models of 1960 and still belonged to the standard appointments of the Swede’s first generation, thus spanning Hagström’s entire model history. Here again we cannot but admire Hagström’s ability to develop long-lasting standardised solutions. By comparison, German competitors like Framus and Höfner developed in the same time a variety of tremolo devices, about ten different ones each, including over-engineered systems that didn’t bring utterly convincing results and were far from being so easily serviceable.

The Tremar design didn’t change much through the years, the only obvious differences being in the arm profile and the plastic button shape of the earliest version (on which the string balls are hooked on holes instead of notches). Further changes are noticeable in the material the unit was made of. In the beginning it was generally some corrosion-sensitive bronze-aluminium alloy (especially on Kent models). Later on Hagström used some kind of bronze or hard brass whose golden shade may show up when the nickel plating wears off.

Due to its low-cost and simplicity of installation, the Tremar was puchased in the early to mid-60’s by a number of other guitar makers, including :

Cosmetically modified versions of the Tremar were also used by the Italian company Polverini for some of their own models as well as for the Goya Rangemaster series they shipped to the U.S. According to some guitar scholars this version was directly supplied by Hagström, but rumours say it was just a more or less legal copy.

Since the Tremar was also available as a separate unit for DIY.ers, Hagström had for some time a right to claim that it was the world’s best selling tremolo. Here we have a pic of an old Japanese-made SG knock-off fitted with a Hagström vibrato. 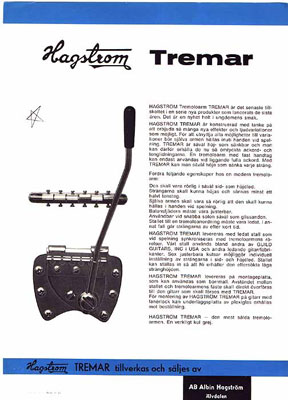 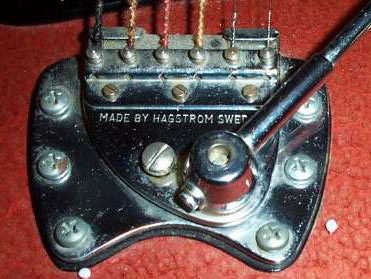 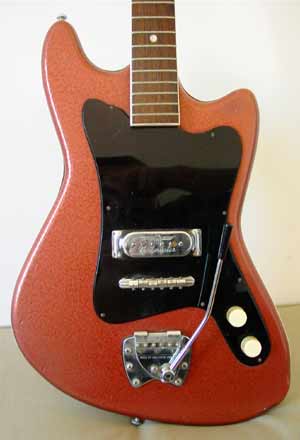 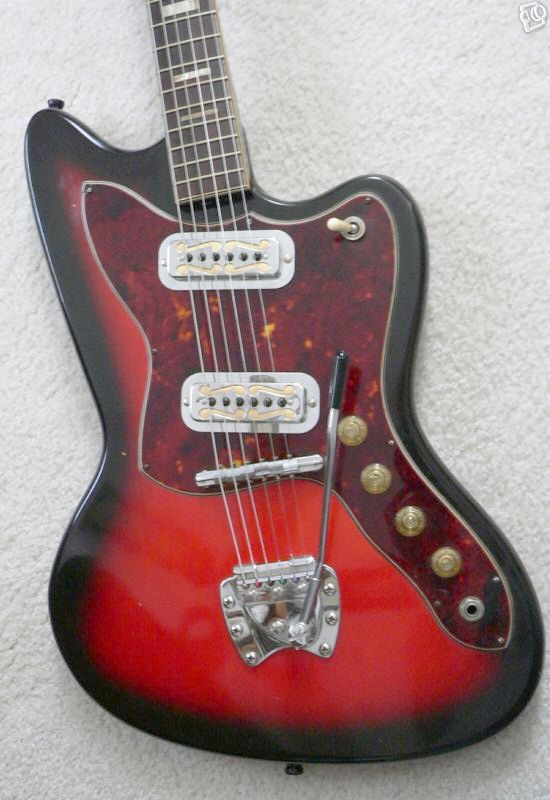 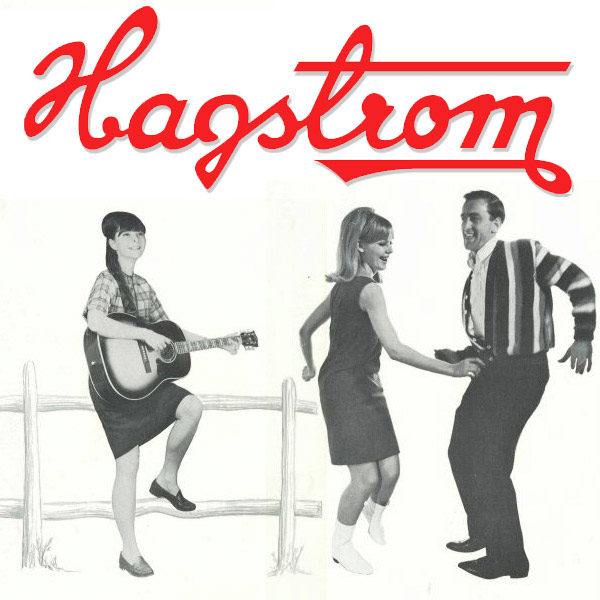